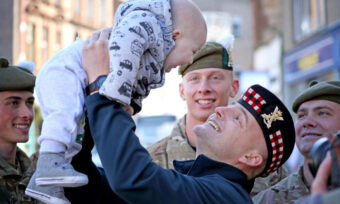 Homecoming Parade for the 2nd Battalion, The Royal Regiment of Scotland

Our Primary 7 pupils were honoured to experience the homecoming parade for the 2nd Battalion, The Royal Regiment of Scotland, welcoming them back from their latest tour of duty on Friday last.

Around 400 troops marched through Ayr and Primary 7 were stunned. The soldiers then marched past the Wallace Tower and then on to a civic reception at the Town Hall where some of the soldiers were presented with operational service medals. Of the experience, pupils said:

“Watching the troops made me think about how awful it must be to leave your family.” Oscar Kirkwood

“I liked seeing the tanks because I’ve never seen them before.” Emma Henderson

“The parade made me think about how many soldiers have left for war over the years and how few have returned.” Lillie McCluskie

“I liked the way that they marched at the same time. It was all synchronised.” Katie Cowan