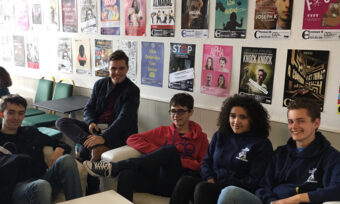 Advanced Higher English Pupils Enjoy the Delights of the Fringe

Advanced Higher English pupil, Jake Fremantle, has authored the following review of his class’s trip to Edinburgh in August.

On the twenty fifth of August the five Advanced Higher English candidates, accompanied by Mrs Ulph, attended the world renowned Edinburgh Fringe Festival. The first item on the schedule was an avant garde, one man production of Stefan Zweig’s monumental novella: Chess; recommended to the class by Deputy Head Boy Harry Ledgerwood. The novella deals with themes of obsession, fascism and insanity which was perfectly portrayed by an award winning actor from Massachusetts’ own Omnibus Theatre. The day closed with a provocative new production of Irvine Welsh’s The Performers. The five pupils returned home at nine in the evening from a day that ranged from existentialist paradox to gritty yet humorous social commentary (with a quick detour into the hedonistic delights of affordable French cuisine).

The five S6 pupils were entrusted with compiling an itinerary which, upon receiving Mrs Ulph’s seal of approval, was embarked upon. Hill Street Lodge was the first port of call, for the aforementioned one man show. An initially sceptical class and teacher became quick converts to the suicide note of Stefan Zweig. The actor managed to perfectly capture the insane mind of the main character and provided a treat for both the uninitiated and fans of the novella.

A small French restaurant by the name of Bon Vivant served as the next refuge from the drizzle and, ever the sage council, Mrs Ulph outdid herself with this choice. The starters were delectable. The main courses were tasteful in both meanings of the word. However I have been instructed to not make you chew through too much unnecessary detail, so I shall move swiftly on. The group then ventured down the Royal mile. To the left were tourist shops full of tchachkis, through the centre a cobbled street, performers in-front of historic buildings were to the right. Flurries of fliers were thrust upon the students. In the search for a bin for these, many iconic sights were probably missed. A detour into the Vintage Mobile Theatre added some continuity to the trip, with scenes from the history of the Edinburgh International Festival displayed inside the vital piece of historical grounding.

The day’s final treat was in the form of noted Scottish writer Irvine Welsh (sadly lacking) and his new play, (definitely not lacking) The Performers. The ‘black comedy’ of how a violent, drug fuelled cult film from the nineties starts with the audition of two mobsters, and the question of how far they will go for the job. Exploring identity and desire, it is a story of, (to quote the brochure and end on a cheeky innuendo) “naked ambition”.