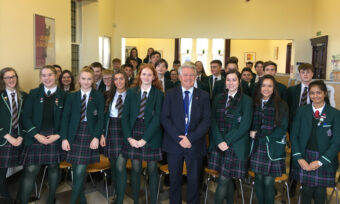 Shortly after we returned from our summer break this year, the S4 National 5, Higher and Advanced Higher classes were joined by our local MP, Mr Bill Grant, for a ‘Q&A’ session about his role as an MP.

From being a fireman to becoming a local councillor to now our local MP, Mr Grant discussed how each role has helped to shape him and his views.  Most importantly he feels strongly about helping people in the community as demonstrated by the variety of experiences in life.

Since becoming an MP just over a year ago, Mr Grant has had to adapt to many new changes in his way of life. When talking about London, he told us of how it is ‘a whole new way of life’ from a small town like Ayr to the busy underground stations and the sheer size and busy atmosphere of the capital.

The floor was opened to questions from pupils that will help with our assignments and dissertations.

When asked about the implications of Brexit upon Scotland, he firmly believed that there would be no negative impact on Scotland. He informed us that although he was a ‘Remainer’ before the referendum, “as a democrat” he stands with the overall UK-wide decision to leave the European Union. He also strongly felt that it wouldn’t result in a second Scottish Independence Referendum, which was interesting.

The role of MPs and their influence in committees is a topic investigated in National 5 and Higher Modern Studies and Mr Grant was asked in particular about his role in the Science and Technology Committee. He appeared very enthusiastic about his role and without giving away too much it was very clear that he was excited about the new possibilities in science and technology, including, hopefully, the spaceport at our own Glasgow Prestwick International Airport.

Finally, an important question was asked about how young people are able to participate and become involved in politics. Mr Grant has provided pupils from Wellington work experience which is a valuable experience for any individual interested in politics or social subjects. Moreover, he was enthusiastic about getting younger people engaged in politics through joining a political party and helping to campaign.

His only regret about becoming an MP was that he didn’t do it sooner. Many thanks again to Bill Grant for taking the time to talk to our classes. It was a great experience and a valuable opportunity for all involved.[/vc_column_text][/vc_column][/vc_row]