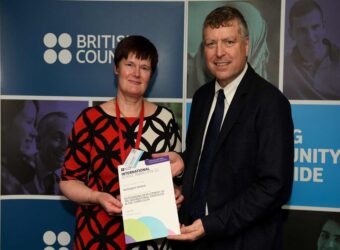 Wellington School has been awarded the British Council’s prestigious International School Award in recognition of its work to bring the world into the classroom.

The International School Award celebrates the achievements of schools that do exceptional work in international education. Fostering an international dimension in the curriculum is at the heart of the British Council’s work with schools, so that young people gain the cultural understanding and skills they need for life work in today’s world.

Wellington’s international work includes collaborative work with schools in eight other countries: Bulgaria, France, Germany, Macedonia, Portugal, Romania, Slovenia and India. We have two Erasmus+ projects, Eurostronomia and Celebrating Success which are co-funded by the European Union. Through eTwinning, younger pupils have shared work across Europe and have been excited to receive letters and small gifts from new friends in our partner schools. A highlight of the session was our Magical Christmas collaboration with our partner school in Dortmund.

Fifteen lucky pupils travelled to Germany to work together with their new friends at the Mallinckrodt-Gymnasium on a visit co-funded by UK German Connection. On 11 November 2018, a group of senior pupils marked the Armistice in Compiegne, France, and commemorated the event with young people from across Europe at the very spot where the treaty was signed 100 years previously.

Primary pupils have enjoyed working together with older pupils from the Senior School. In Primary 3, girls and boys loved learning German Christmas carols taught by an S6 pupil, the primary Erasmus Club made the most of the all-through context of Wellington and the P7 German Club benefited hugely from being mentored by Senior School pupils.

Sir Ciarán Devane, CEO of the British Council, said: ‘The school’s fantastic international work has rightfully earned it this prestigious award. The International School Award is a great chance for schools to demonstrate the important work they’re doing to bring the world into their classrooms. Embedding an international dimension in children’s education ensures that they are truly global citizens and helps prepare them for successful lives and careers in an increasingly global economy.’

The award, which celebrates its 20th Anniversary this year, is now available worldwide in countries such as India, Sri Lanka, Egypt, Lebanon, Nigeria, and Pakistan. Over 6000 International School Awards have been presented to successful schools in the UK since the scheme began in 1999.

The International School Award encourages and supports schools to develop:

International Education, is not just about trips abroad, it is about developing global awareness in our pupils and helping them to see their place in the world as young global citizens. In an increasingly connected world, their future colleagues may not be the people sitting next to them in class but a young Indian or Canadian working on a project with them over the internet. The opportunities offered to pupils at Wellington School give them an advantage when writing university applications and CVs. Our pupils can show that they already have the skills which allow them to work in a variety of environments with different nationalities.

Wellington’s International Programme is also rewarding for staff, especially when they see our senior pupils leave Sixth Year with a wealth of experience behind them and friends, in the real and virtual worlds, spread across the planet.”

This year Wellington’s international activity has already gotten off to a great start, with various trips, events and our recent Wellington & Mallinckrodt-Gymnasium 30th Anniversary Celebrations![/vc_column_text][/vc_column][/vc_row]