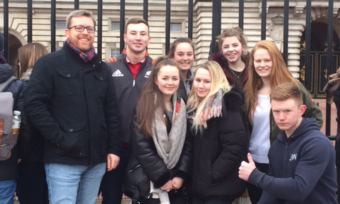 [vc_row][vc_column][vc_column_text css=”.vc_custom_1520352259503{margin-bottom: 0px !important;}”]London is one of the most important financial centres in the world, so much so that it vies with New York as the pre-eminent location for international finance. For this reason, it made a very apt destination for Advanced Higher Business Studies trip in late February.  Pupils took part in a range of visits and activities planned for them by Mrs Munn and Mr Byers in the city where over half of the UK’s top 100 listed companies (FTSE 100) and over 100 of Europe’s 500 largest companies have their headquarters.

Pupils started with a visit to the Bank of England Museum where they learned about this renowned institution in great detail, including the role of the Bank England in controlling inflation and interest rates in the UK. Outside the Bank of England, pupils even found a statue of their name sake – the Duke of Wellington! The group were lucky enough to visit City Halls (which commands excellent view of Tower Bridge) where they listened to a talk by the Mayor of London’s Business Advisor who detailed the the challenges and benefits of setting up a business in London, and what the Government is doing to counteract the possible consequences of Brexit.

London is forever expanding and regenerating which appeals to those in the world of business. Pupils took a 2-hour guided walking tour of Shoreditch, a very up and coming area favoured by new, creative industries. Still in East London, pupils visited Old Street Roundabout, which has been affectionately renamed ‘Silicon Roundabout’ (in deference to Silicon Valley) owing to the numerous young web companies that have moved in to the vicinity. Due to the surge in popularity of this area, it can be difficult for business to establish themselves and individuals to live here. Our very knowledgeable guide explained and showed us examples of ways that small businesses are aided so that they can still locate here at cheaper rates. He also introduced us to lots of small entrepreneurial businesses in the area which have already set up there.

On the final morning, the group visited the Houses of Parliament, Buckingham Palace and pupils were allowed a well-deserved one hour shopping spree on Oxford Street! A great time was had by all and Mr Byers and Mrs Munn said ‘we have nothing but praise for the conduct of our Advanced Higher pupils – their behaviour was exemplary and they were a real credit to the school.’[/vc_column_text][mk_divider style=”padding_space”][/vc_column][/vc_row]