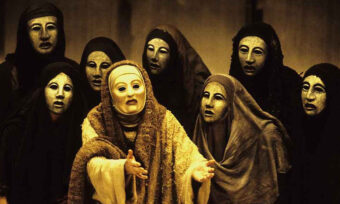 On the evening of the 31st August, senior pupils in Higher Classical Studies and Advanced Higher Classical Studies visited the Citizens’ Theatre in Glasgow to attend a performance of the Oresteia, a trilogy of tragedies written by the Greek playwright Aeschylus in the 5th century BC concerning the terrible events which struck the royal family of Argos in the aftermath of the Trojan War.

Wellington students study the first of these plays, “Agamemnon”, in Higher Classical Studies. It was a marathon session, lasting four and a half hours, but the time flew by as the production was superb, well-deserving the rave reviews it obtained from the Edinburgh Festival. Students particularly enjoyed the startling scene of the murder of Agamemnon.

Wellington is the only school in the south west of Scotland where pupils have the opportunity to study Latin and Classical Studies. Read more about the various levels at which your child can study this subject and find out more about the course content at each stage here.