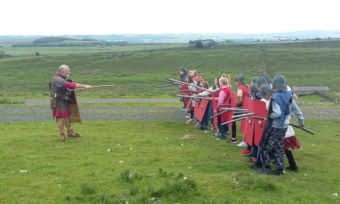 When Our S1 Latin Scholars Met a Roman Gladiator

Mrs Thomson, Teacher of German & French and a self confessed ‘new Roman enthusiast’ accompanied Mr Dudgeon, Head of Classics and S1 on the annual trip to Hadrian’s Wall.
‘This week, S1 Latin pupils (all 34 of them!) were put through their paces in training to join the Roman Army. After travelling via Gretna to the rolling hills of Northumbria, the pupils visited the Housesteads Fort, situated at Hadrian’s Wall. The pupils had the opportunity to be trained by a Roman officer, who quickly brought his new recruits up to speed on the demands of army life. They followed basic drill commands (in Latin!) and, as well as getting to try out first hand the heavy and cumbersome armour worn by soldiers of the time, they practised the Testudo (tortoise) shield wall formation, at times taking heavy fire! Luckily all came out unscathed.
After a picnic lunch in the green fields surrounding the fort, the pupils were treated to a vivid and entertaining account of life in the fort from Mr Dudgeon, who managed to really bring the place to life for them with his anecdotes and natural ability as a raconteur.
The pupils took much away from this fantastic day out, but the real highlight, beating even the fish supper at Longtown on the way home, had to be seeing the “best preserved Roman toilet block in all of Europe.” Mr Dudgeon assured us all that this would be a party piece for years to come.’