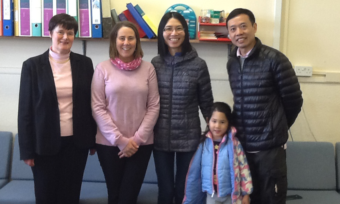 Former Pupil Pays Us A Flying Visit From Canada

Mrs O’Connell and Mrs Coontz were absolutely delighted today when former pupil, Mabel Chan, dropped in to say hello. We always love to see former pupils but in Mabel’s case, we were especially surprised given that she now lives in Toronto!

Having left school in 1995 – after her 5th year – to attend the University of Strathclyde, Mabel’s family, including her younger sister, Nellie (who also attended  Wellington), then moved to Canada the following year. There, she completed her studies and now works in Systems Design at one of the country’s major banks. Both Mrs O’Connell and Mrs Coontz remember Mabel as an extremely studious pupil, who spoke little English on moving to Scotland from Hong Kong not long before. This did not impede a young Mabel who was active in every aspect of school, even taking on a role in a drama class! Mabel did point out that she played the part of a lighthouse, but still…

Accompanied by her husband and daughter, Ella, Mabel said that she had ‘only good memories’ of school and has chosen a school in Canada ‘much like Wellington’ for little Ella.

Mabel was one of our last boarders and after looking round Carleton Turrets (she was thrilled to finally see inside the staff room!), Mrs O’Connell, her former form teacher, took her to see Drumley, the then boarding house. As she waved the Chens off, Mrs O’Connell said, not without a tear in her eye, ‘the boarders will always have a special place in my heart’.

Were you a boarder? Do you remember Mabel? If you would like to be kept up to date with former pupil news and events, please register here.