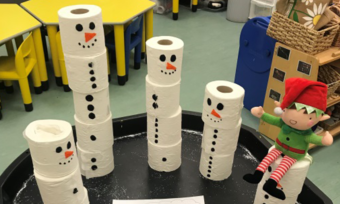 Gerry The Elf Visits The Nursery

At the beginning of December, Gerry the Elf arrived in the nursery from the North Pole. Santa Claus sent Gerry to keep an eye on the boys and girls in the nursery to see if they were being naughty or nice!

However, Gerry hasn’t really been behaving himself in the nursery! The children have been outraged at his naughty behaviour, so much so that they even threatened to phone Santa! Gerry has been getting up to all sorts of tricks at night, from putting pants on the Christmas Tree (and the Reindeer’s head) to adding food colouring to the milk! He even drew minions on the bananas! Thankfully, Gerry has also done some nice things for the boys and girls, like making a glittery writing tray and making snowmen out of toilet roll for the children to build with.

All the Nursery ladies are delighted to say that Gerry has lots of good stories to tell Santa about the girls and boys when he gets back to the North Pole, perhaps especially those who visited Windyhall Nursing Home on Wednesday 20th December. The transition children sang songs from their Nativity Play and as always, received a lovely welcome from the residents and staff.