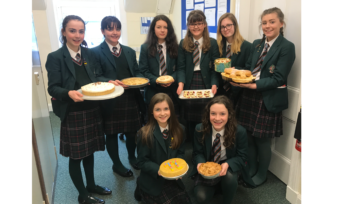 The Maths Department celebrated Pi Day today (the birthday of the physicist Albert Einstein no less!) in a double period of mathematical fun. Senior 1 pupils baked pi(e)s, had a competition to see who could memorise the most digits of pi and then completed a workbook full of mathematical quizzes and brainteasers.

Did you know that Chinese maths whizz, Lu Chao, recalled the first 67,890 digits of pi (there are at least 1.24 trillion in total)? Meanwhile, at Wellington, Rebecca Kirk took the 1st prize for accurately recalling 32 digits, a very impressive number! Second place went to Elsa Dunsmuir who managed a stunning 51 decimal places (with one slight error). Both girls did spectacularly well. Mr Richmond, AKA Super Pi, revealed the winners from the group of eight competitors to a deafening drumroll and cheers of delight from pupils.

We challenge you to test yourself on some of the brainteasers below: