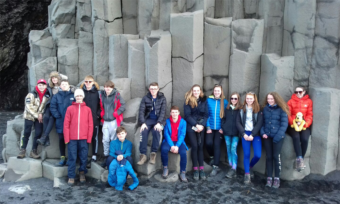 The biennial Geography trip to Iceland took place earlier this term – it is an extremely popular excursion and is always a tremendous success, partly due to how much the department manages to pack in to the three days! This was Mr Ledingham’s first ever Wellington Iceland trip and it is understood that he was just as, if not more excited than the children!

Pupils made this video whch they played at an assembly they presented earlier this term. It gives all the highlights of their trip and some of the photography is truly spectacular. To give you a flavour of the trip, they visited: an open air geothermal swimming pool at Laugardalslaug and enjoyed flumes and hot tubs under a clear starry sky; Seljalandsfoss waterfall (which is more than 200m high!) and the Solheimajokull glacier tongue; pupils also saw spectacular coastal scenery at Reynishverfi beach (how are you getting on with your Icelandic pronunciation?!) and witnessed the powerful waves on this very exposed black sand beach; Þingvellir National Park (Þingvellir and the Great Rift Valley of Eastern Africa are the only sites on Earth where the effects of two major plates drifting apart can be observed); the Eyjafallajokull museum and the ‘Golden Circle Tour’, taking in Hellisheidi Power Station (Iceland has harnessed natural geothermal energy to supply its capital city with renewable energy); the Great Geysir, where pupils saw spectacular plumes of ejected hot water (eruptions at Geysir can hurl boiling water up to 70m in the air but thankfully, no one was propelled skywards on this trip!); Reykjavik city centre was a highlight with pupils visiting the Hallgrimskirkja (church), Harpa Concert Hall and Hofdi House; and last but not least, the Gulfoss waterfall and Hvítá river. On the last evening, pupils enjoyed a dip in the Blue Lagoon, which is located in a lava field in Grindavík on the Reykjanes Peninsula, in south western Iceland. They were very fortunate to see the stunning Northern lights while bathing in the warm waters of the lagoon which are rich in minerals such as silica and sulphur. Everyone came back looking refreshed, revived and enthusiastic about their geography studies!