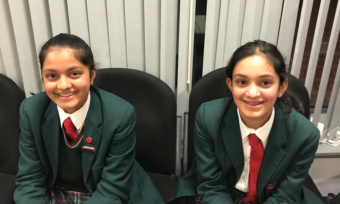 Meera Mohankrishnan and Anubha Bal competed in the semi-finals of The Law Society Donald Dewar Debate last week and only narrowly missed out on a place in the final. 128 teams from 98 schools across Scotland entered the competition and the girls got to the final 16 – a commendable feat in itself! The judges and members of the audience were very impressed with their performance, particularly given that they were only given the motion ‘This House would introduce gender quotas in Parliament’ an hour before the debate and were not allowed internet access.[/vc_column_text][/vc_column][/vc_row]