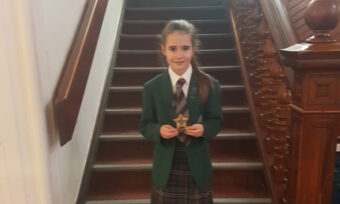 Did you know that the 16th of November was the UN’s International Day for Tolerance? To reinforce the clear message of this important day (that, as a society, it is fundamental that we listen to and respect others’ views) Primary 7 worked very hard to prepare entries for the national Learn2Think Young Journalist Prize “Tolerance Day” competition.

In class, pupils learned about the generic features of news articles and persuasive writing and were inspired by a visit from a journalist who is Sports Editor for a national newspaper. Each pupil then selected a topic on which they have a passionate opinion and put pen to paper. As a requirement of the competition, they were also required to interview two people.

Mrs Clachan, Mrs Bradley and Miss McGowan are delighted to announce that Wellington pupil, Emma Henderson, who wrote a fantastic piece emphasising why ‘everyone should have access to sport regardless of disabilities or financial background’ has been selected as the national runner up!

Emma’s article is here below:

Is it important that everyone can play a sport?

I strongly believe that everyone should be able play a sport, no matter if they have disabilities or don’t feel they can afford to. Everyone should get the same chances.
Firstly, it goes without saying that exercise helps everyone’s fitness. The NHS states that exercise can help you stay at a healthy weight and having a healthy weight can also reduce the risk of major illnesses. Some people think that they are not very good at sports so they just don’t do any but they should not think like that. I believe that everyone should at least try a sport as they might enjoy it.
Secondly, as a result of doing exercise it also helps your mental health. The NHS also states that doing physical exercise helps to reduce stress, makes you think clearly and reduces the risk of depression. Callum Nairn, a man who set up a football team for children who live in a poor area, when questioned how does the football club help the children he stated that, “ It gets them off the street, playing a sport and makes them feel included as part of a team.”
Thirdly, another reason why everyone should be able to do a sport is because it is very sociable. You feel proud and you believe in yourself. Doing a sport can bring people together no matter if your family are poor or if you have disabilities. Gillian, a tennis coach at Prestwick Tennis, states, “encouraging whole families to come on a Sunday and play for free helps give children confidence and encourages them to take up a sport they may not have thought could be for them”.
The Paralympics and Invictus Games are good examples of how sport brings people together from all over the world regardless of their disabilities. The Invictus Games are really good because soldiers who have been injured by wars do not just sit on a chair thinking they can’t do anything. Instead, it gets them out and about and believing in themselves again.
These are three good reasons why everyone should be able to do a sport. Why should anyone be excluded?
https://www.nhs.uk/live-well/exercise/