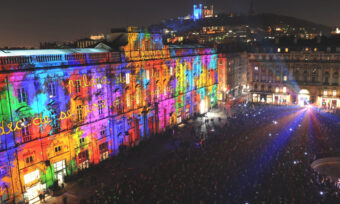 Let There Be Light (In Lyon!)

In December 2018, a group of 7 S5-S6 pupils enjoyed a cultural visit to the 3rd largest city in France, Lyon. For five of the pupils, the visit to Lyon followed their recent Senior Exchange with St Dominique, our partner school in France.

Accompanied by Mrs McCandless and self-proclaimed ‘local boy’ Mr Levif, the group had a great time exploring the city centre, from the Fourvière Basilica and Old Amphitheatre to the Old Roman town, the city zoological park and the Christmas market. They also took a guided visit of the Centre d’histoire de la résistance et de la déportation (Resistance and Deportation History Centre) to learn more about Lyon, during World War II and how the city came to be known as the ‘Capital of the Resistance’.

The pupils thoroughly enjoyed their stay in the ‘world capital of gastronomy’ where the group experienced typical cuisine and some very unusual fayre – from the cheesy Raclette and Tartiflette of Savoie to Archie’s ox tongue and Meera’s Boeuf Bourguignon.

Early December is the perfect time to visit Lyon as the annual Festival of Lights attracts around 500,000 visitors to the city annually. On both evenings of their stay, the Wellington group wandered around the city centre from one light display to the next, enjoying the many stories and themes projected on to the historical monuments of the city.

All pupils interested in taking part in the next exchange should contact a member of the Modern Languages Department. See Facebook for a video interview where pupils Archie and Isla explain why they think exchanges are a fun and effective way to learn!