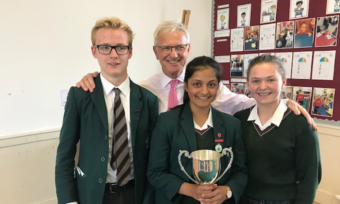 The McKinstry Debate is a highlight in the debating calendar, especially given the close links its namesake has with the school. Mr McKinstry, Chairman of The McKinstry Company and President of Ayrshire Chamber of Commerce and Industry, sent his children to Wellington and for the last ten years, he has been pivotal in making the McKinstry Debate what it is today. The Reverend Aitken, long-time friend of Wellington, joined Mr McKinstry on the panel. Both judges offered some excellent insight into the art of public speaking and adjudicated with sensitivity.

The McKinstry debate never fails to showcase the impeccable standard of debating at Wellington and this year was no different. Teams tackled the following motions: ‘This House believes that humanity should fear advances in artificial intelligence’ and ‘This House would allow prisoners to choose death over a life sentence’.
Callum Byers, Anubha Bal and Isla Novak won convincingly in favour of the motion ‘This House believes that the government should pay stay at home parents for their work’. Grace Woodhouse, Amy Barbour and Joanna Kennedy were defeated on this occasion, but such strong speakers will not remain silent for long and we look forward hearing them all again in future debates.
Senior 6 pupils ran Media Corner, this year boasting three ‘tweeters’. Their lively and very witty commentary was well received (mostly by avid Twitter user Mr Byers) but our wider community also engaged with Harry, Jake and Matthew who did an excellent job of keeping up. As they said themselves ‘We would like to thank the astounding articulate Mr McKinstry for giving us his time, it is a great pleasure for the school to host him. It was a pleasure as always to see Rev Aitken. That’s all folks!’