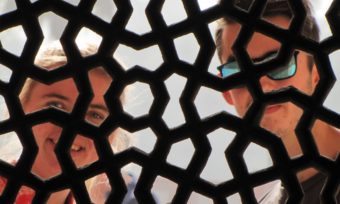 Twelve pupils from S5 and S6 spent nine days in the north of India during the Christmas break. Their tour started in Jaipur and then continued to Agra and to Delhi.

Jaipur is home to our partner school, St Edmund’s School and we attended their annual craft fair before visiting a local paper factory and a pottery workshop. Our hotel was situated in Raja Park and in the evening two St Edmund’s teachers took our pupils shopping. The girls all chose stunning saris to wear at the New Year’s Party in Agra.

Amber Fort is situated close to Jaipur and the group visited the fort, approaching on elephants. This was followed by visits to the Observatory and the City Palace. After the cultural part of the visit the group visited a local kite-maker and learned to make and to fly kites.

Arriving in Agra on Hogmanay, the first challenge of the evening was donning the saris. Wrapping five metres of fabric elegantly and safely is not easy, even with YouTube to follow. Our girls eventually looked stunning in their saris which were expertly draped by dressers employed by the hotel and it is no exaggeration that they stole the show at the New Year’s Party and even featured in the local press the following day.

The highlight of a visit to Agra is the Taj Mahal. We visited on a foggy afternoon, along with tens of thousands of locals and tourists.

The final stop on the tour was Delhi where the group visited Old and New Delhi. Humayun’s Tomb was declared almost as impressive as the Taj Mahal and the rickshaw ride through Chandi Chowk was exciting.

The photos here give a flavour of the tour. A detailed report will follow in the summer edition of the Turret. The next trip to India for S5 and S6 pupils will take place during Session 2019-20.

We hope you got a flavour of the trip from the many photos uploaded to Facebook!