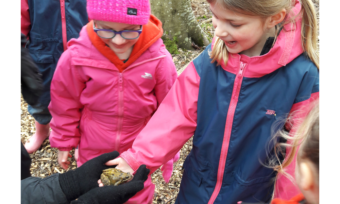 Primary 1 & The Importance of Outdoor Play

Every week, Primary 1 go on an adventure to the Chestnut Woods, the site of our Outdoor Nursery. There, the children made a friend, Mr Frog. Primary 1 teacher, Miss Sanderson offers her opinion why outdoor play is fundamental in the development of healthy minds and bodies:

‘Each week, we go to the woods and it is a great opportunity for children to play with each other in the great outdoors.

We don’t always have a planned activity as I think it is important for children to have time to play freely in an unstructured way. Playing with other children, outdoors if possible, is how they learn important skills for life: problem solving, decision-making and managing their emotions. It is also how children learn to make friends and get along with other children and it is an opportunity for them to be creative, takes risks, build perseverance and resilience – I could go on and on!

Many children were very excited by the frog. At first they were frightened to touch it or hold it, but a few of them overcame their fear and this gave them a wonderful sense of achievement. Some children were very involved in role-play, acting out their own stories based on the story of “Goldilocks and the Three Bears” which we have been studying in class. Others climbed and balanced on logs, both healthy forms of physical development!

I believe that this kind of free-play is very important. Sadly, many children today do not have the same opportunities that I had as a child to play outdoors with other children, where the play is directed by them . Children nowadays are more likely to spend time in adult-directed activities (extracurricular lessons, for example) or else in front of a screen.  While there is a place for extracurricular lessons, and I do not deny that children learn a lot from them, they do not necessarily hold the same intrinsic rewards as free, child-directed play does. Too often children do something only of external rewards – certificates, star points, etc and not just for the joy it brings. That said, we do still have a planned activity in the woods. Last week for example, we cooked and ate porridge!’