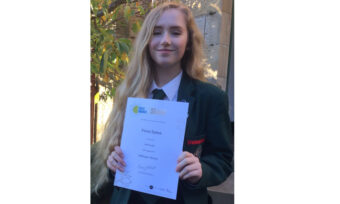 This piece has been written by Fiona Sykes, Science Captain

In August I was lucky enough to be able to take part in one of the Royal Zoological Society of Scotland’s Science Summer Schools that is open to students in S5 or S6. The week at Edinburgh Zoo allowed me to not just learn about the different species situated there but also work together with other students on various animal based challenges and workshops. At the end of the week my team and I presented a study on the behaviour of the zoos Red Pandas which the allowed each of us to gain a Silver CREST Award (CREST Awards are the only nationally recognised accreditation scheme for Science, Technology, Engineering and Mathematics project work) as well as created a pitch in poster form on what animal we believed would be suitable for the zoo to next bring into their collection.

The school has not only raised my awareness of the complexity of running a zoo but also taught me a great deal about what zoos can do in terms of the conservation of species and many different skills that will come in handy in my future. I highly recommend this experience to others not just because of how good it looks on a CV but also because I have come away with new friends and knowledge that I will take with me as I end my school career and start university.