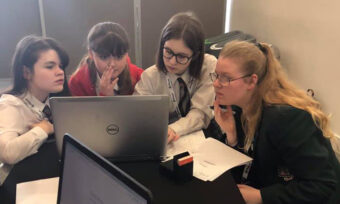 Senior 2 girls recently took part in a nationwide Cyber Treasure Hunt competition. Impressively, this event was developed by three 6th year pupils, collectively known as Turing’s Testers, from St Kentigern’s Academy in West Lothian. Under the stewardship of their teacher, Toni Scullion (Cyber Security Teacher of the Year 2017 and founder of dressCode, an initiative aimed at getting more girls interested in Computing Science) over 200 teams entered, of which one came from Wellington!

Toni said “If you can code, you can change the world. Coding is such a core, fundamental skill for swathes of the workplace now and I want girls to feel empowered. It’s just dire when you look at the gender diversity numbers in Scotland and the uptake of girls in STEM roles and worrying that there are so many schools with no computing specialists or exposure to those skills.”

Thankfully, Wellington’s Mr O’Connell, Principal Teacher in Computing, is ahead of the curve giving his pupils the requisite skills and confidence to take part in competitions of this nature and more than that, inspiring his pupils with the limitless possibilities in data science.[/vc_column_text][/vc_column][/vc_row]