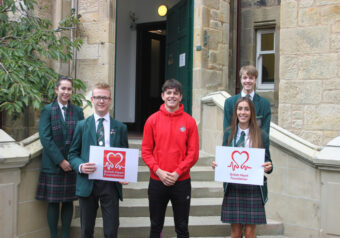 As is the case each and every year, S6 students suggested various worthwhile causes to champion for the forthcoming session. However, after listening to six excellent presentations, a vote was taken and the clear winner was the British Heart Foundation.

The British Heart Foundation (BHF) funds over £100 million of research each year into all heart and circulatory diseases and the things that cause them. Heart diseases. Stroke. Vascular dementia. Diabetes. They’re all connected, and they’re all under the microscope.

BHF research has given us machines that can restart hearts, the ability to fix arteries in tiny babies, the power to give someone a heart they weren’t born with, and so much more. And that’s why their work is as urgent and vital as ever.

This was the motivation for S6 pupil Fraser Thomson, who nominated the charity. As he explained to his assembled peers: “My father, Tom Thomson, passed away last year from an unexpected heart attack. This was a sudden and horrible way for a man like him to go, and I have really felt for anyone else that has had to go through the same experience.”

BHF aim to ensure that at least 70p in every £1 raised or donated is spent on its life saving research. The rest is invested to grow the organisation’s income. Thanks to the amazing efforts of its supporters, in 2018-19 BHF raised more than £138 million. A staggering £128.2 million was spent on life saving research and support for heart patients, while £47.6 million was spent on the costs associated with generating income. In other words, for every £1 raised, around 72p went straight to funding research on heart and circulatory diseases, and the risk factors that cause them.

However, there is still so much work BHF need to do. Seven million people in the UK live with heart and circulatory diseases, and these diseases are responsible for more than a quarter of all deaths. BHF stated an ambition to invest over £1 billion in cardiovascular research over the next 10 years. Help us to help them beat heartbreak forever by donating to the S6 Charity throughout the year. We know that this year will be more difficult because of Covid-19, but we, the Sixth Year, and the entire school community are determined to generate as much as possible by using our creativity and drive to run as many activities as possible, so watch this space for more details.

Read More Fixtures & Results
Return to all news
We use cookies to offer you a better browsing experience & analyze site traffic. Disable your browser cookies or read about how we use cookies in our Privacy Policy. If you continue to use this site, you consent to our use of cookies.
Accept & Close