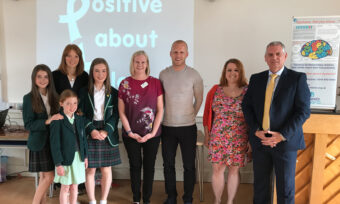 A Special Guest Visits Drumley To Talk About Dyslexia

What does dyslexia mean to you? According to Rachel Miller, Wellington pupil and one of Dyslexia Scotland’s Young Ambassadors, it is simply ‘a different way of learning’. Earlier this term, Rachel presented a special assembly for Junior School pupils in Drumley Hall. She opened by telling pupils that 1 in 10 people have dyslexia, that it runs in families and that it will never go away but that there are a great number of advantages too. For example, while mental maths may be a ‘no no’ and reading aloud in class is tricky, Rachel says that people with dyslexia are brilliant problem solvers, excellent sportspeople and successful entrepreneurs (40% of the world’s self-made millionnaires are dyslexic and Rachel would like to be counted as one of them in the future!).

Drumley was silent as Junior School pupils learned that while certain aspects of school life are different for Rachel, she has become adept at developing strategies and thinking laterally in order to make things easier. Technology has made things much simpler and Rachel is thankful for her trusty iPad!

After her interesting introduction, Rachel invited the children in the audience to take part in a quiz (the Junior School children relish all quizzes), before introducing a very special guest, Steven Naismith. Steven is a professional footballer who has played for teams such as Rangers and Kilmarnock, not to mention the Scottish national team.

Steven explained that while he was at school, he was poor at reading and writing and tried hard to hide the fact that he had dyslexia. He went on to say that ‘there are a lot of tools and support available now which just did not exist when I was at school. Reading out loud in class made me panic so  I would scan the paragraphs coming up next so that when it was my turn, I had had a bit of a head start. It was really tough having dyslexia but I soon realised I was really good at something and that was football! People with dyslexia have good peripheral vision and that has been invaluable to me as a professional sportsperson. As I became better at playing to my strengths, I also become more confident in asking for help. Soon I went from bottom of the class to the top! . I finally started to embrace the fact that that I had dyslexia – it has been a valuable journey which has taught me that everyone should pursue their dreams!