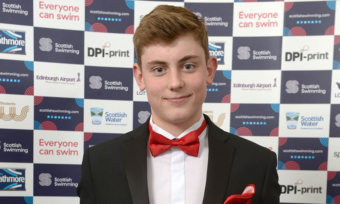 A great day was had by Marshall Illingworth at the 2017 Scottish National Schools Aquathlon Championships on the 21st of April.

Fifty schools, and over 240 pupils took part in the event with pupils from S1 to S6 competing in their year groups. Marshall raced in the S5/6 category where competitors were required to swim 500m and run 4km. Marshall was the first swimmer out of the water, leading by 27 seconds and had one of the fastest transitions. He put maximum effort into his run and finished 10th. Congratulations!

The photo shows Marshall collecting the ‘Eian Prentice Memorial Trophy’ in recognition for his achievements to Junior Open Water Swimming at the Scottish Swimming Awards 2016.