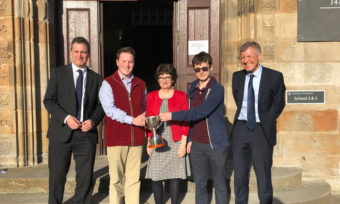 The result has been declared and Willie Rennie MSP beat us to it! Yesterday, Wellington pupils Dara Hunter Blair and Callum Duffy won the prestigious John Stuart Mill Cup for their debating performance at the University of St Andrews. Up to 7 debaters can form a team but Dara and Callum were the only two representing Wellington, making this result even more impressive. Did we mention that the boys were competing against 11 other teams from all over Britain too?!

The John Stuart Mill Cup has a dual purpose: to promote interest in philosophy among secondary school students and to model and promote civil discourse on issues of public concern. It is founded on three fundamental tenets:
1. In a multicultural democracy disagreement about important moral issues is inevitable.
2. The members of the public should not shy away from expressing, in the public forum, their convictions on these issues.
3. As a society we could make quicker progress toward reaching mutually acceptable resolutions of these disagreements, without creating resentment and hostility as a side effect, if more entrants in the public debate made use of the philosophers’ toolkit–the attention to logic and fallacy avoidance, the back-and-forth cycle of argument-counterargument-revision, the principle of interpreting one’s interlocutor’s position as charitably as possible, etc.
The John Stuart Mill Cup is designed to reward not the ability to win an argument but rather the ability to thoughtfully advance debates on ethical issues of public concern so congratulations to Dara and Callum on this most virtuous achievement!
The Centre for Ethics, Philosophy, and Public Affairs at St Andrews University said ‘Congratulations to the winning team on their measured, lucid and charitable performance. Well done!’