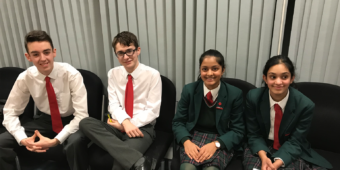 Meera Mohankrishnan and Anubha Bal have reached the semi finals of The Law Society Donald Dewar Debate. Last week, the girls won their debate at Grange Academy where the motion was ‘This House believes that democratic countries should boycott the 2018 World Cup in Russia’.

Meera and Anubha knocked out Callum Duffy and Christopher Summers on the way to securing this win but our commendations go to them all as this is the first time that a Wellington team has reached the semi finals of this event!