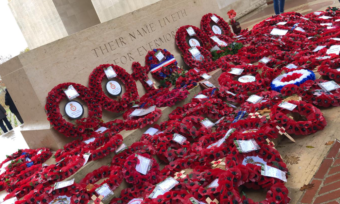 Eight senior pupils travelled to France for the 2018 UCAPE Conference last weekend. Pupils from eighteen schools across Europe made a presentation about a war hero from their country – students came from France, Ukraine, Ireland, Hungary, Poland, Belgium, Germany and many other European countries. The Scottish group chose to present Dr Elsie Inglis.

On Saturday, pupils started with a visit to the World War 1 museum at Peronne and then went to the Lochnagar crater where the British exploded a mine under the German trenches. The group then went to the Thiepval monument which commemorates the British and French soldiers that lost their lives in the Somme.  The pupils visited Canadian and German trenches, the memorial to the 51st (Highland) Division and a German war cemetery. The pupils joined the group at a special anniversary service at the Eglise Saint-Jacques in Compiègne. This was followed by a visit to the railway carriage where the Armistice was signed in 1918. The conference was concluded by the pupils coming together to write a charter for the future of Europe.[/vc_column_text]