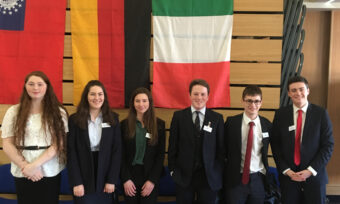 Wellington’s First Delegation to the UN

On 24-25 February, Wellington sent its first delegation of Model United Nations (MUN) participants to a national conference at Hutchesons’ Grammar School, Glasgow where schools from all over Scotland and northern England sent teams of students to take part in activities designed to encourage debate and critical thinking about global issues. Six Wellington students took on the role of honourable delegates from Italy for the two days and were charged with preparing position statements and resolutions for the various committees the delegates were invited to attend. The issues they discussed ranged from the problem of gangs in Italy and other countries around the world, and territorial disputes in the South China Sea.

The 200 delegate strong two day event encouraged students to work in a cooperative and productive fashion with delegates from various schools across Scotland. The Wellington students made friendships and enjoyed themselves immensely. In the awards ceremony on the closing day special commendation was given to Italy’s resolution in the Youth committee on tackling gangs and organised crime. The Wellington delegates were Callum Duffy, Neil Large and Dara Hunter-Blair of S6, and Amy Phillips, Emily Henry and Eve Meechan of S5.

Mr McDougall, Head of Modern Studies, will set up a permanent Model UN Society later in the session and pupils from S3-S5 will be invited to become involved with a view to taking students to more Model UN conferences in the future.